I finally found time to migrate my blog and website from Orchard CMS to an ASP.NET Core MVC project.

This is something I had been intending to do for a very long time now, but I postponed it ever since due to the sheer amount of effort this meant. But I was able to free up some time over the Christmas holidays and made a promise to myself that "my first blog post in 2017 would appear on my new website".

Well, here it is: The very first blog post on my new site! And those were all the necessary steps it took me to get there.

A couple of years ago I had made the decision to run my blog and website on Orchard CMS. I had chosen it because it was a blog engine running on ASP.NET MVC, therefore allowing me to add custom routes for my projects, articles, CV, etc. It seemed like a good idea at that time and I really liked Orchard's power and extensibility.

One thing I had underestimated at that time though, was how huge Orchard actually was. At the end of the day, Orchard is a full blown CMS which usually means that it is a big overkill for running a personal website and blog.

It just wasn't a very good fit from the beginning but it took me too long to actually realize that. My problems and concerns with Orchard just became more and more obvious over time.

When I started blogging 10 years ago, Windows Live Writer was probably your best authoring tool option to use. For mysterious reasons though, Microsoft stopped developing this great tool in 2012 but it was still OK to use afterwards. Only, it started to feel dated after some time.

Then in 2015, this tool got open sourced as Open Live Writer which caused some initial enthusiasm. But looking at its GitHub repo now, this seemed to be the classical "open source a product to its grave" scenario. There have hardly been any commits during the last year and its feature set is still not at par with LiveWriter (plugins!).

In addition, its HTML WYSIWYG approach feels dated and clumsy by now and really falls apart on high DPI displays. Another thing that has always bothered me about it was its poor support of code snippets.

So basically, from the moment on I had first written documents using the Markdown syntax on GitHub, I had always wanted to use this same approach for my blog posts.

Long story short: I figured, I really needed to escape this Orchard / LiveWriter ecosystem I had locked myself into, if I wanted to keep my happiness and sanity as a blogger.

Considering available options for running my new website and blog on, those were the criteria I came up with on which I wanted to base this decision:

Those were the actual solutions I considered:

Nonetheless, in the end I decided not to go with downr and roll my own solution because:

The die had been cast: I was rolling my on solution.

Of course I did not want to lose my existing 230+ blog posts stored in Orchard and needed some way of exporting those.

Since Orchard is a CMS and most of its artifacts are kept inside a database, writing some code was required to export the content of my blog posts and their meta data.

As a first step, I just added a new route Export to the existing MVC HomeController class so I could trigger the export process by navigating to http://<ORCHARD_HOST>/export.

The interfaces IBlogService, IBlogPostService and ITagService are part of Orchard and its dependency injection mechanism takes care of providing them to the constructor of the newly created BlogExporter class.

Export basically iterates over all existing blog posts and uses Json.NET to persist the individual Post instances. That's the metadata I was interested in:

The only thing missing now are following helper methods that deal with building URLs and returning the categories / tags for a blog post.

So now I had all I needed for migrating my blog posts to the new solution:

Note: I deliberately decided not to export comments, since I (sadly but honestly) did not get much involvement there.

These are the basic building blocks I used for putting the new site together:

Yeoman is a Node.js based tool that can generate project scaffolds based on different templates. One of those templates happens to be for ASP.NET.

I generated the project following these instructions but basically it comes to a simple command line instruction.

In the following wizard I created a Web Application Basic which was up and running using following commands.

To change the default look and feel of the ASP.NET MVC application I imported the CSS and JavaScript files from the Clean Blog Bootstrap theme to the wwwroot directory.

Additionally, I added the Prism CSS and JavaScript files which enable really beautiful syntax highlighting for a huge variety of languages.

This is a small and simple Markdown to HTML static content conversion tool that I wrote.

It tries to follow the Unix Tools Philosophy of "doing just one thing and doing it well". Therefore, all it does is reading Markdown files and spitting out HTML files. Not more, not less. No integrated web server, no project template, just static content generation.

I run the wolf executable inside the wwwroot folder of my web application. By default, wolf looks for a folder called posts that contains the subfolders with the individual blog posts. Such a subfolder's name also acts as the slug (URL route) of the blog post and the first .md in the folder will be converted to HTML.

Of course, your mileage may vary here and you are probably using different folder names in your project. Check out the README.MD file for wolf to see how those default settings can be changed.

So this is how the posts folder looks before running the wolf conversion. 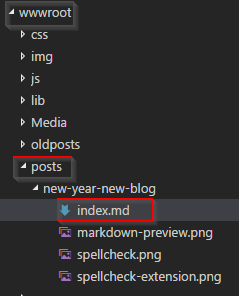 This is after the wolf conversion. 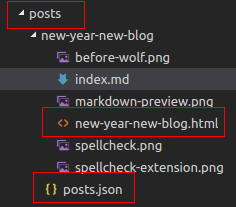 As we can see, we now have an additional .html file per blog post as well as a posts.json file containing the metadata for all blog posts.

This JSON file can easily be parsed in the web application to build the list of available blog posts.

That way, we can later render this content as it is in our Razor view Posts.cshtml.

You might have noticed that we chose the same data format (JSON and .html) files for our previously exported blog posts (the Orchard CMS ones). This means we can easily load them using the exact same mechanism we are using for the newly created (Markdown) ones.

This is my very first blog post written entirely in Markdown and I have to say it is pure joy!

I am currently using Visual Studio Code as my markdown editor. It gives nice syntax highlighting for the actual Markdown code and additionally has a built in Preview functionality. 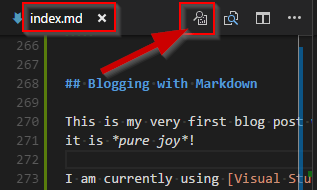 There are also a couple of Markdown extensions available on the Visual Studio Code Marketplace. 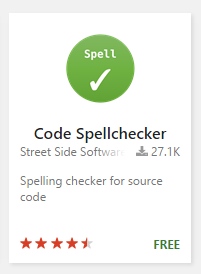 This extension allows for quick corrections or adding new words to the dictionary through the light bulb smart tag metaphor. 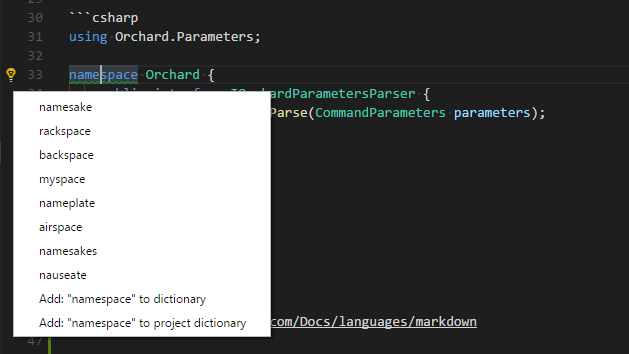 So everything is up and running now and went really smooth so far. Apart from a couple of tweaks und improvements that I still need to do, there are two bigger issues I haven't really made my mind up about yet.

This was quite a lengthy and exhaustive blog post but it was an important step for me and I felt that I should document my motives and steps adequately. If you read this far maybe let me know what you thing (as soon as I have comments in place) or contact me on Twitter @z1c0.