My son is fascinated by cars with the kind of enthusiasm that only kids are able to bring up. He has a huge collection of toy cars already, so I decided that for his 3rd birthday last year, I would get him something different and built him this toy traffic light.

It is controlled by an Arduino Nano, has three LEDs that feature all the states of Austrian traffic lights and it cycles through these states autonomously. You can find the Arduino code for it on GitHub.

But recently, my son asked me if I could make him another traffic light. This time a pedestrian one. Since these feature just two colors / states (red and green), I figured that an Arduino would really be kind of an overkill for this. Also my son wanted to be able to switch between the traffic light’s states manually, so I figured a toggle button, a Flip-Flop and 2 LEDs would do the trick.

I have done a couple of Arduino projects by now but this was the first project that involved no coding and only circuits. This was kind of intimidating at first but also challenging.

Disclaimer: I am a complete and utter noob at electronics.Therefore, if I made mistakes somewhere or you think this build needs improvement, please let me know (in a friendly and respectful way though).

The same circuit designed and exported in Fritzing: 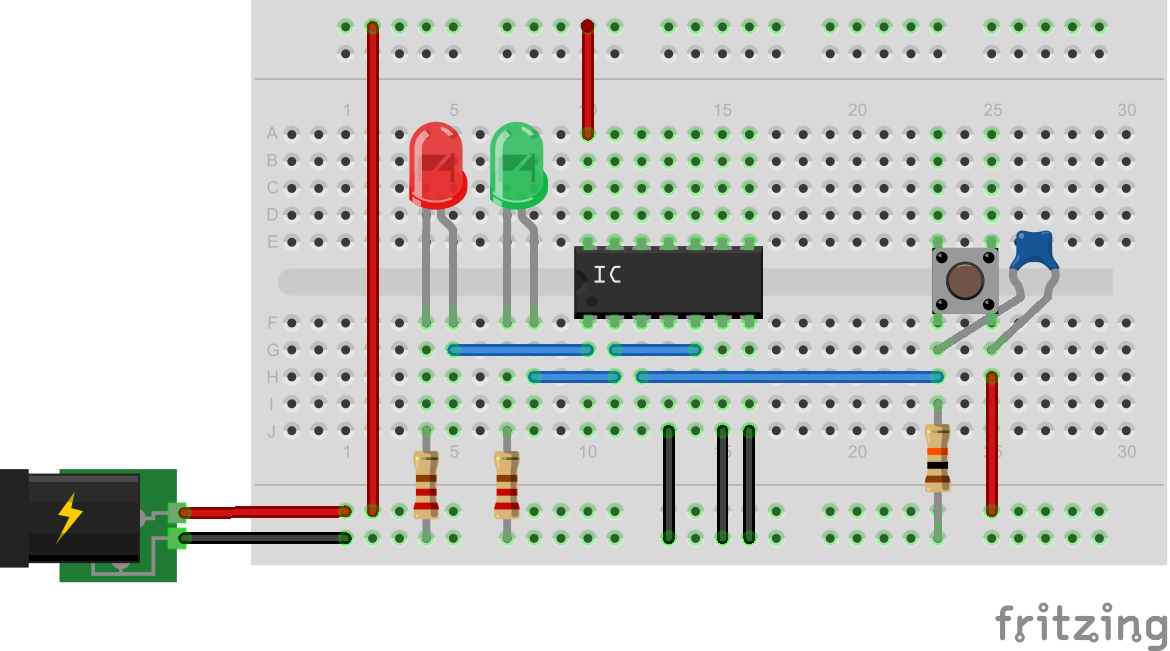 The most interesting part (also the one I was the most unsure about) is probably the Flip Flop. So I’ll try my best an explain it. 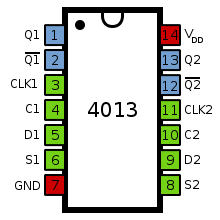 As you can see in this picture, the CD4013BE Integrated Circuit (IC) I used, consists of actually 2 Flip Flops from which our traffic light needs only one.

For a good explanation on the the workings of this Flip Flop (and a truth table of its states) go here.

Now I had a working proof of concept on breadboard and needed to put (solder) things together.

The only thing missing now was the power supply. For that I simply used one of the battery cases for 3 x 1.5 V AAA batteries and led the cables through a plastic column to the case. Again hot glued everything together and the traffic light was ready.

Needless to say, my son really likes his new toy :-)