A few months ago, I realized the hard way that I needed to change something in my life. It was on a hiking tour with friends when I nearly collapsed due to exhaustion. There I finally had to admit to myself how out of shape I had become ... like really out of shape.

It would be easy to blame the whole COVID, lock-down, working-from-home situation for that. Honestly though, this had gotten out of control earlier. I guess a combination of age, poor food choices, little exercise, injuries, 10-12 hours of sitting in front of a desk nearly every day, paired with mental health issues does not really set you up for success, fitness-wise.

It's still hard for me to admit this here, but for the first time in my life the scale was greeting me with a 3-digit figure. 100 kilograms! That both scared and shamed the hell out of me at that moment.

So, I needed to change things ... and this is what I did:

No real epiphanies so far - I know - but for each of these changes an app or device helped me, which might help you as well. So, follow along.

Exercise in combination with a proper diet had worked "wonders" for me already in the past. Whether it was losing weight (from >90kg to <80kg) or building up muscle (~93kg at ~14% body fat), my body usually responded very well to that. So I had high hopes that this would not have changed too much with age.

For the most part, exercising means running in my case (mixed with occasional weight-lifting and cycling).

I decided to pick up running with a proper training schedule this time. The reason for that is that previous back-to-running attempts had resulted in injury for me. Often, I had been too eager getting back to my previous running form and demanded too much from my body.

Note: I am not affiliated with any of those companies that make the apps that I mention or recommend in this blog post. I'm not even saying you should be using these apps, I'm only telling you what worked for me.

The app starts with a free 1 week trial and after that the 10K running plan can be bought for 8,49€ - I figured that I had spent more money on crappier stuff in the past - so what the heck 🤷‍♂️.

In the beginning, the app tries to assess your current fitness form by asking a few question. It put me in week 3 of a 14 week schedule which is based on 3 runs per week.

The schedule starts really easy and breaks your exercise routines into intervals of running and walking. Over time, the overall time of your workouts gets longer and the walking intervals get fewer and shorter.

I must say that this app really helped my reaching my goal by helping me to start slow and not overexert and injure myself. However, I improved rapidly and reached my 10K goal way earlier than scheduled by the app. The app did not really pick up on my progress, which is actually disappointing since they advertise it to support "progress at your own pace". Nonetheless, I followed through with the program by running at least 3 times a week and recording my runs in this app. 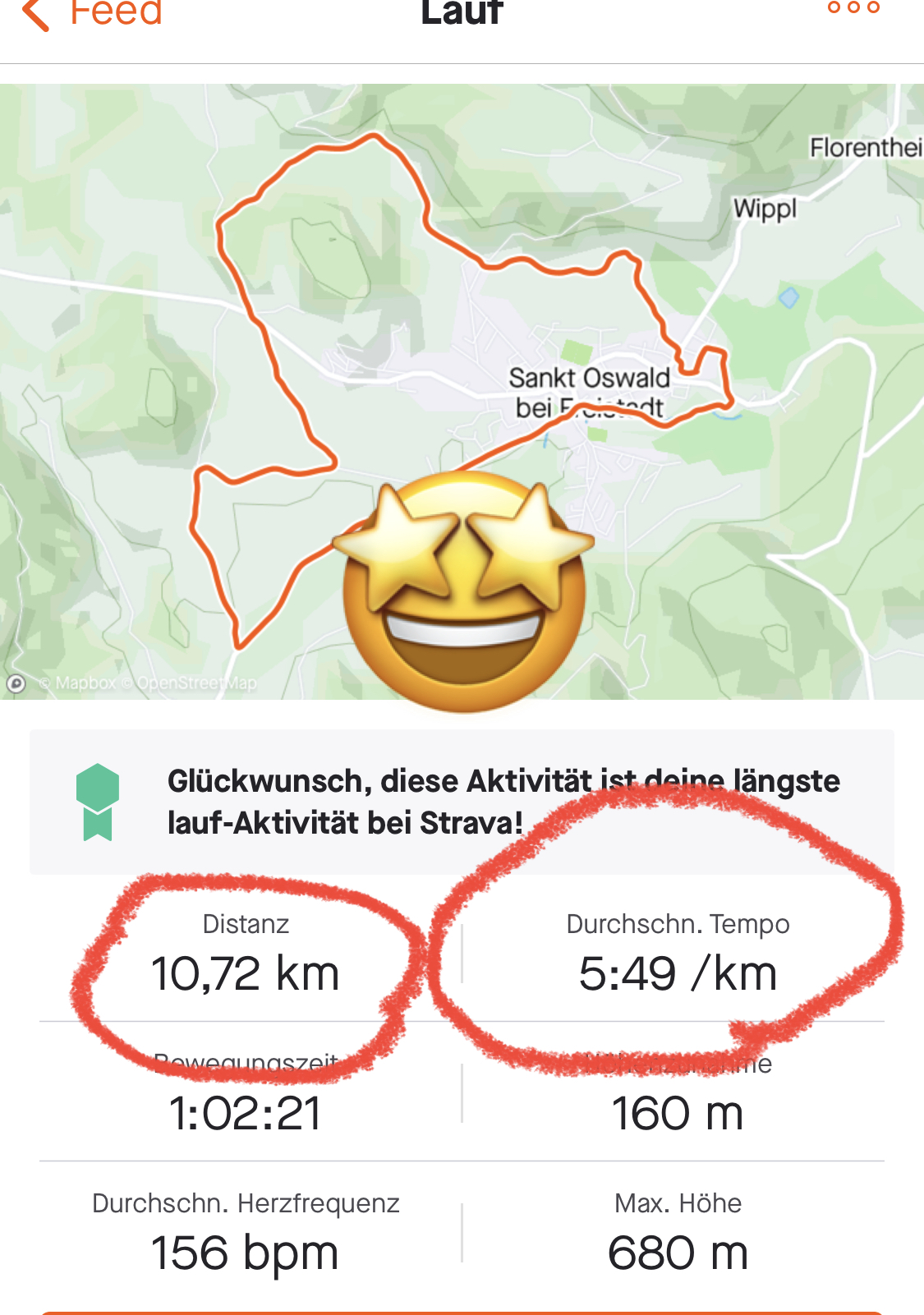 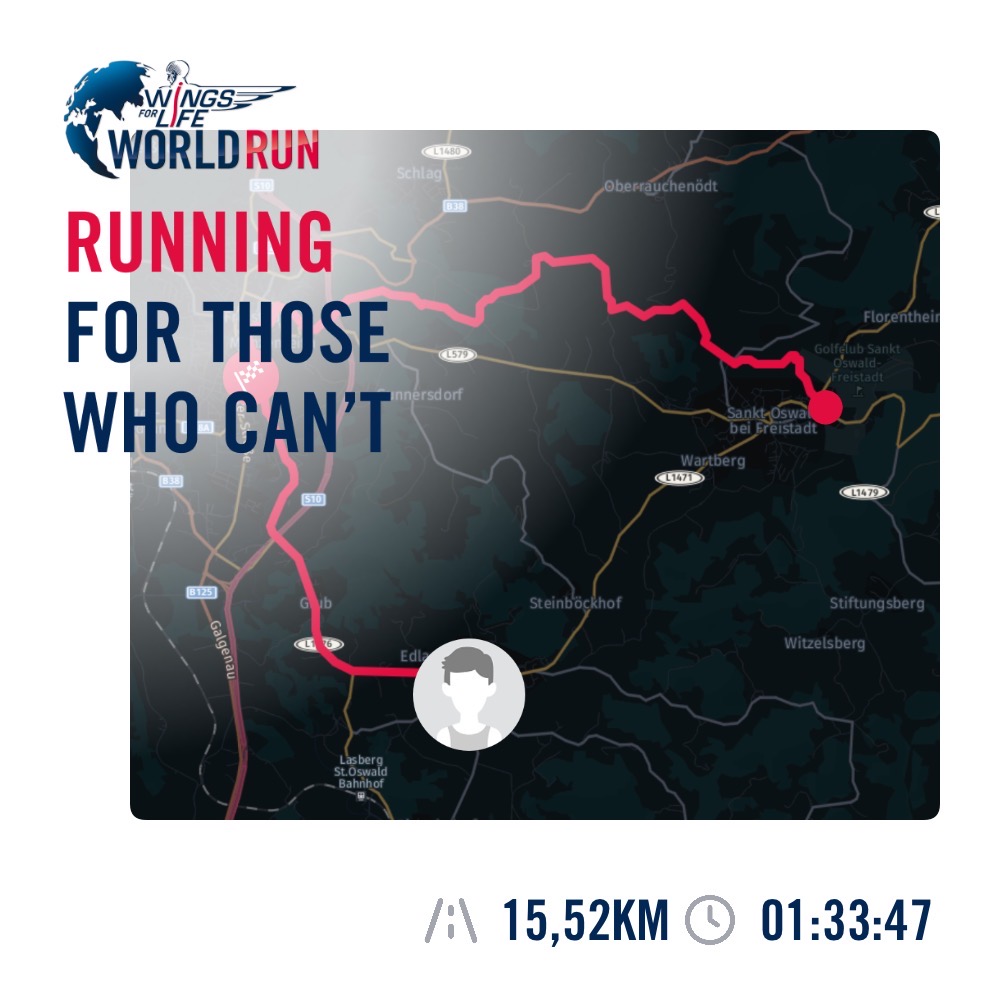 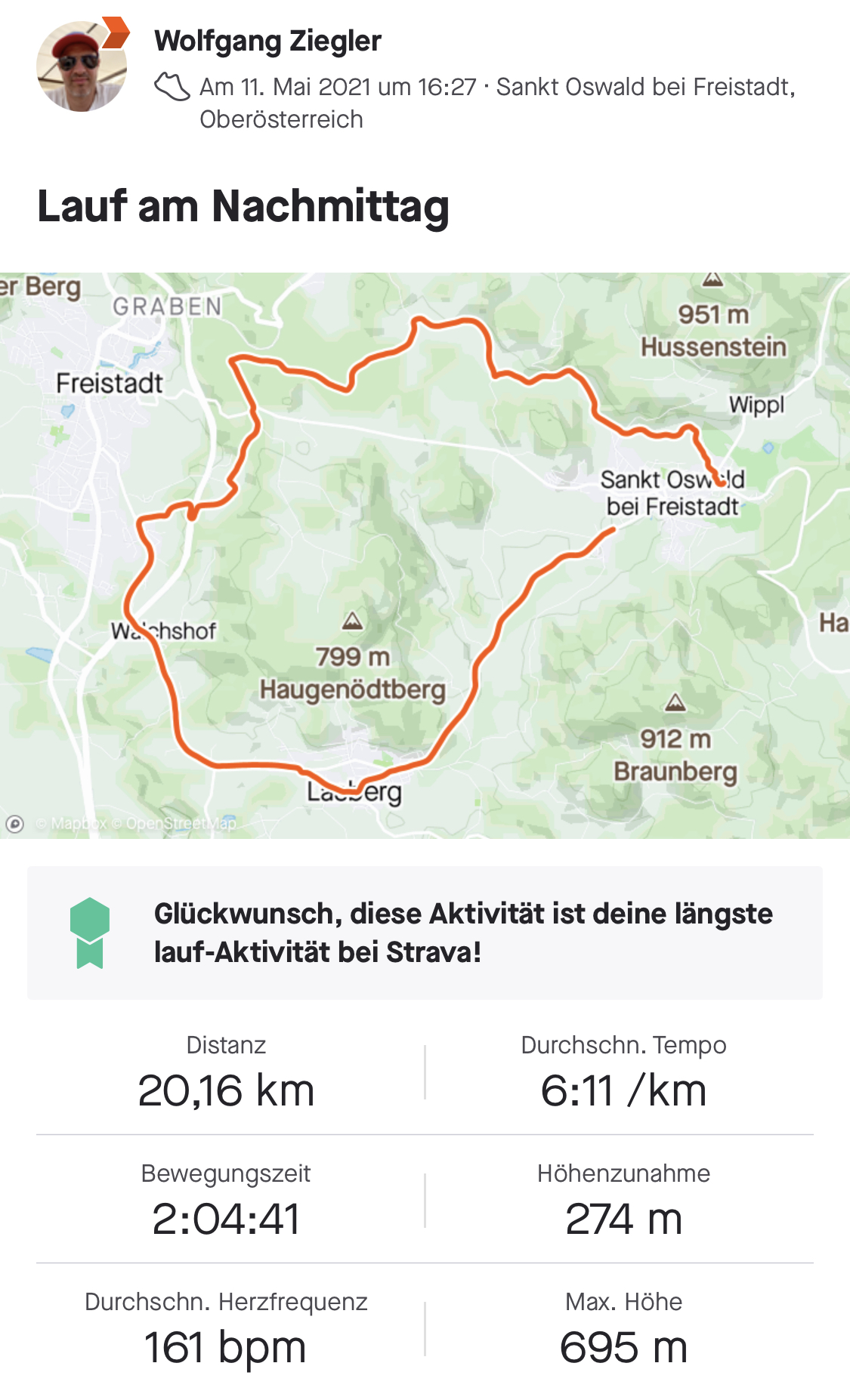 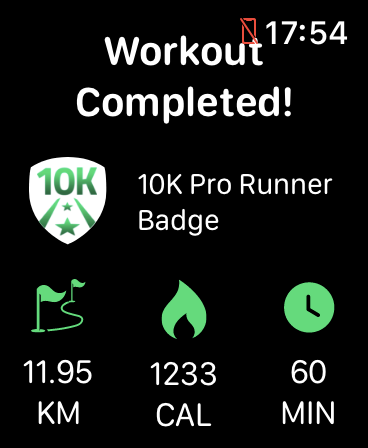 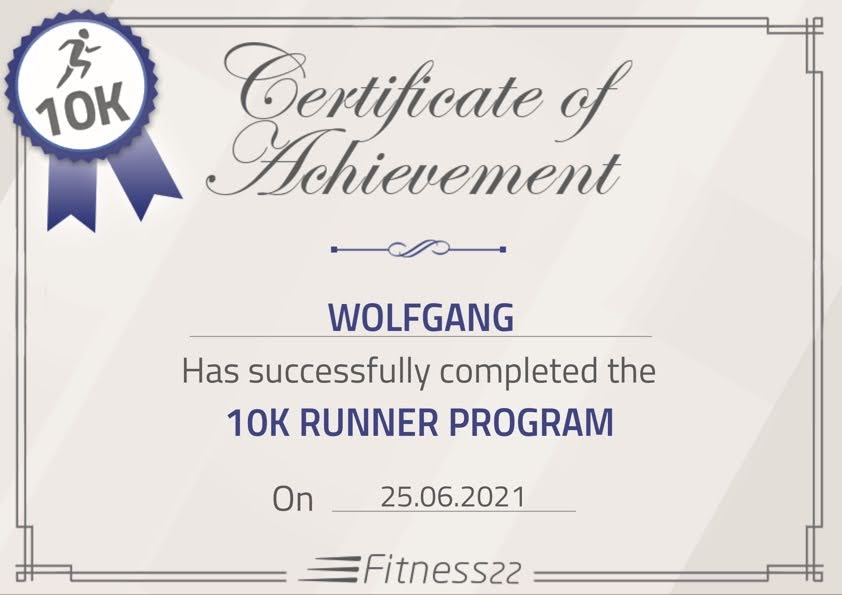 Even though I had used the 10K runner app a bit differently than originally intended, it helped me reaching my actual fitness goal which was losing weight. To be more specific - I lost more than 10K (now: kilograms) of bodyweight. So in the end I actually did a "couch to (minus) 10K"! 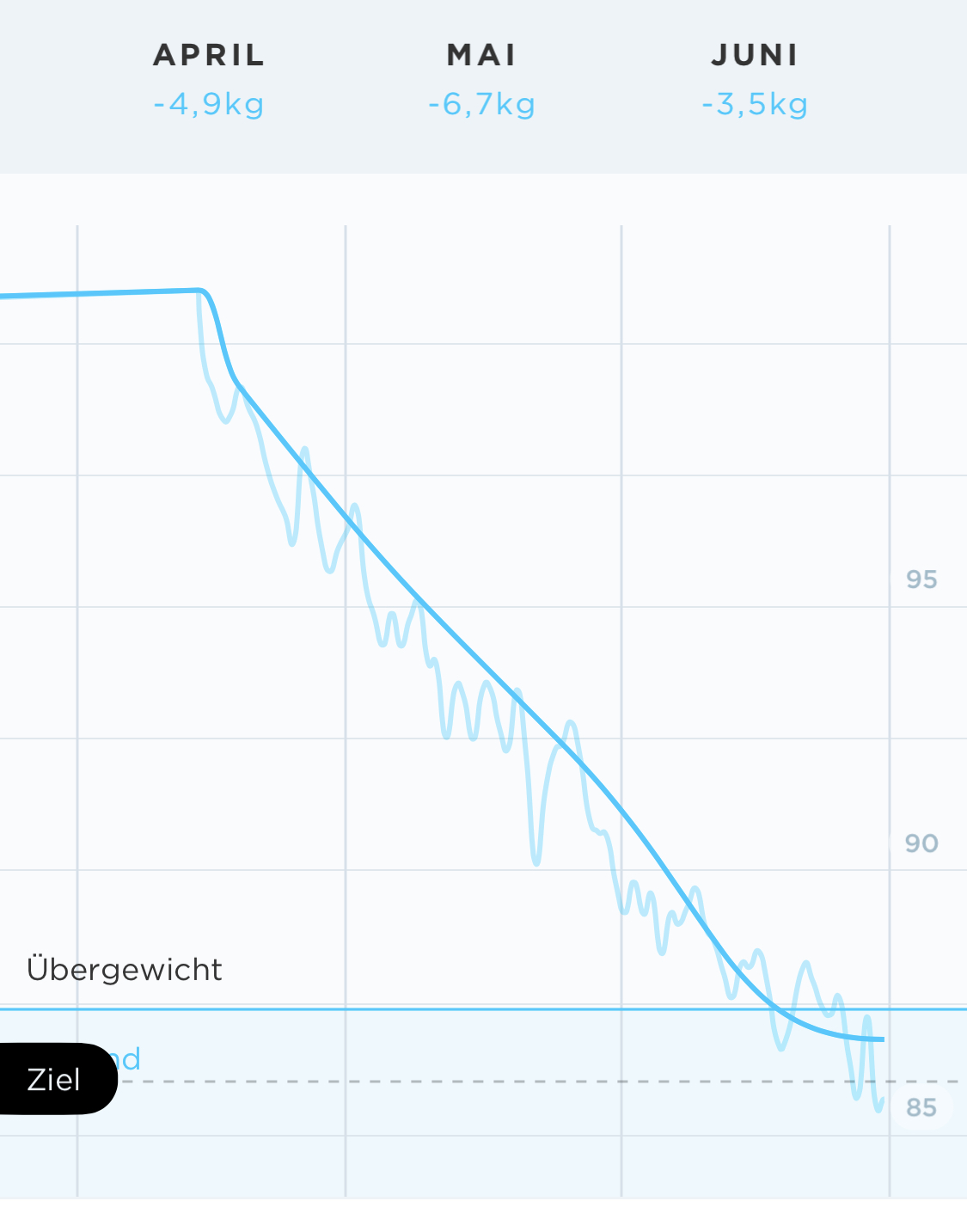 Losing weight without changing or improving your diet is usually impossible. So I needed to address this as well. The important part is to form a habit rather than going on some extreme diet which is unsustainable over time. I figured that intermittent fasting is a habit that works well for me, since I am not much of a breakfast guy anyway and I shouldn't eat late, so an evening-to-noon-fasting-interval (on weekdays) would work well for me.

I never bothered to check if there are other or better apps for that because what more would I expect than:

And so far this worked very well for me. I usually do:

I am more than happy with my weight loss (see above) even though I have lost a lot of muscle by now and need to pick up a strength-building-routine soon.

After 1 week of dieting and exercising (my initial commitment), I rewarded myself with a smart fitness scale, the Withings Body+ which is a fantastic device I have to say (again: I am not affiliated with any of those companies).

I'm weighing in daily after getting up in the morning, before breakfast to get consistent readings and track my progress that way.

The Withings Health Mate app is well-made I have to say and integrates nicely with Apple Health. It gives you regular feedback and helps you track your weight-loss (or other fitness) goals.

Last but not least I also tried to change my mostly sedentary life-style during work.

I actually already had a standing desk (IKEA BEKANT) in my home office but had not made good use of it recently.

So I introduced a very simple policy that I'm sticking to since then:

So simple, yet so effective.

This routine works perfectly for me. I could not bring up the energy in the early morning hours to work standing, but after lunch it's the perfect way to fight off the post-lunch-fatigue. Being up on my feet during the afternoon also better prepares me for my post-work exercise routine, I guess.

Well, most importantly, I hope to keep my current form and avoid falling back into bad habits for as long as possible. I'm not really concerned with my bodyweight anymore - even though a bit less body fat would probably look good and highlight some of the remaining muscle better ;-)

Speaking of, I also intend to focus a bit more on weight-lifting to bring some of the muscle back that I broke down during this rather rigid diet and cardio exercise program.

However, running and a proper diet are definitely the key ingredients in my case, so my goal is to embrace those as an elementary part of my life-style (again).