TL;DR: BucketList<T> is a data structure that performs exceptionally well for a certain usage scenario:

In my use case, this reduced the runtime from 7 hours to 17 seconds!

In December of last year I took part in solving the Advent of Code programming puzzles for the first time. Since then I became a bit obsessed with that and started solving also the older events going back until 2015.

Day 19 of 2016 presented an interesting challenge that took me a while to solve (with a reasonable runtime) and led to the solution based on this BucketList<T> data structure.

The basic idea behind this problem is that we have a:

My first approach was using a LinkedList which performed OK for small list sizes. But for large lists (e.g. 3.001.330 was my puzzle input) the performance was dismal.

That's a runtime of more than 7 hours 😬.

The problem was the linear search for locating the opposite element in the list that caused an O(n²) complexity.

Using a simple List<T> (instead of LinkedList<T>) performed equally bad because in that case the remove operation causes a runtime complexity of O(n²).

A better (by a lot) solution

So I needed a data structure with linear or better performance for:

My solution was a custom data structure I called BucketList (ha ha) which: 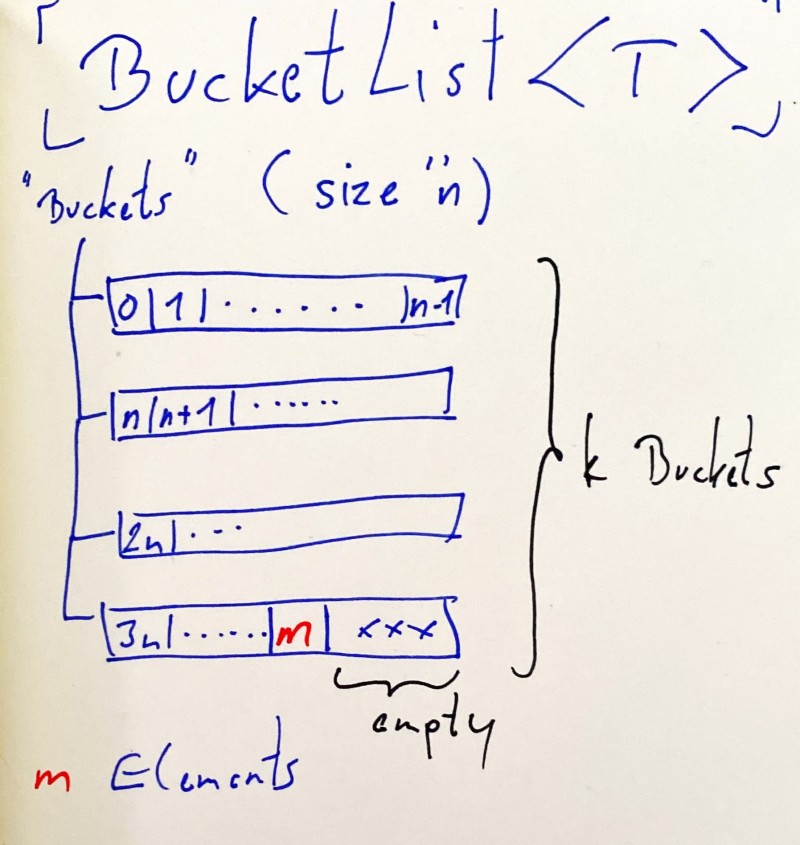 This way, when performing an index-based lookup I have nearly constant¹ O(1) access to elements and removal is only limited by the List<T> performance of a single bucket.

¹ Actually O(k) where k amounts to the number of buckets which should be negligibly low compared to n.

This brought the runtime down dramatically!

Note: A bucket size of 25.000 worked best in that specific scenario but your mileage may vary, of course, and depends on the problem input size.