This has happened to me the second time within a couple of days now, so I might as well blog about it and save you (or my future self) some time by avoiding this problem.

After having pushed a small update to my Window Phone App Hang Man, I received this dreaded Email, stating that the submission of the app has failed.

Since this Email does not provide any further info on the exact reasons for the failed submission, I assumed digging in to the Windows Phone Dev Center Dashboard might bring some clarification. But unfortunately, STATUS: SIGNING FAILED was the only further information provided there.

This status basically means that some of the automated checks performed on the recently uploaded XAP package have failed. No human testers and certification personnel had been involved so far.

That means something really basic must have gone wrong. But how could this be avoided in the future?

Visual Studio comes with a built-in test kit that can be started in the main menu through Project | Open Store Test Kit. This test kit unleashes a test harness on your application package that would also run on Microsoft’s servers having published an app. So chances are, if this test kit uncovers any problems or errors with your app, its submission and certification will also fail.

That said, let’s make sure to run all these tests and fix all problems and concerns found by them. 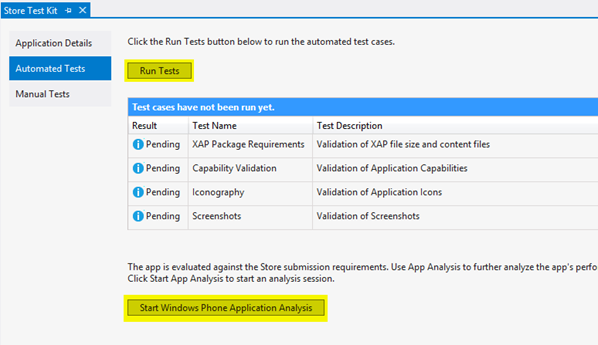 This is stupid, but it has happened to me: A thing as trivial as data corruption can cause the signing error above.

So, that’s what worked for me. The first time it was actually an issue with my app that got discovered by the store test kit, the second time I was unfortunate to encounter a data corruption.

If you have similar or deviating experiences regarding the SIGNING FAILED submission error, just sound of in the comments.