There's a lot of bad stuff going on in the world right now. From politics, the Ukraine war, the energy cost crisis it triggered, over climate change to the ongoing COVID-19 pandemic, there are not many good news if you open social media or some news outlet.

While that alone could be enough to impact one's well-being and mental heath, obsessing over these topics on social media (aka doomscrolling) can really put you in a dark place.

That's exactly what had happened to me lately. Actually, I think this toxic behavior started with the beginning of COVID-19. I found myself permanently checking my Twitter feed, which soon became this this infinite stream of bad news and people battling each other over everything and nothing.

I found myself enraged over other people's (perceived) stupidity, feeling powerless about all the political corruption, anxious about my and my family's future and altogether feeling really, really miserable ... all that while permanently cradling my iPhone and doomscrolling (mainly) Twitter. I literally spent 1 or 2 hours each day doing just that and becoming more and more miserable and anxious.

Breaking out of a bad habit

I knew that what I was doing was absolutely toxic and effecting me in the worst way. I became more and more moody, irritable and sad by the day. Luckily, my kid inadvertently intervened by sadly asking me:

"Dad, why are you so quiet lately?"

Realizing how much I also had affected him with my behavior, I kew it was time to change something. Coincidentally, our family vacation was about to start the next day and I remembered how years ago, I completely abstained from my smart phone during that time. But - let's be honest - I would not be able to do that again today, but I decided to do one thing: not checking my Twitter feed for those 10 vacation days. And the only realistic way of doing that was deleting the app from my iPhone. So that's what I did. 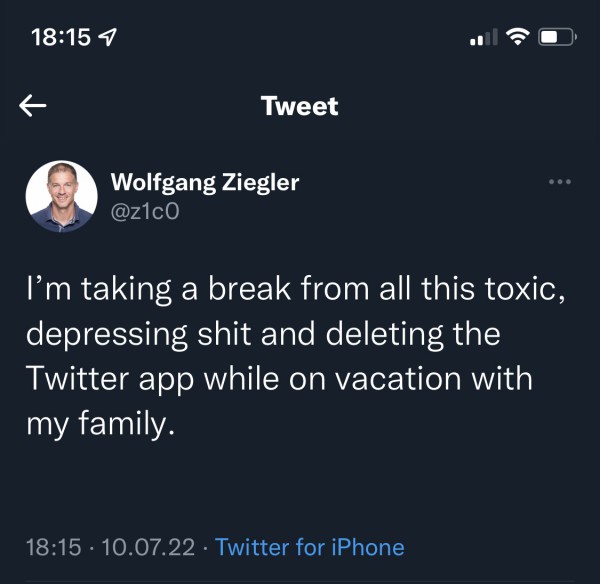 Yes, I fully get the irony of posting this on Twitter - but where else should i have posted it 🤷?

Of course, the change of location and being on vacation definitely helped putting me in a better mood already. But the simple fact that I stopped obsessing over everything for hours each day worked miracles. I felt liked a changed person. I was just ... happier. 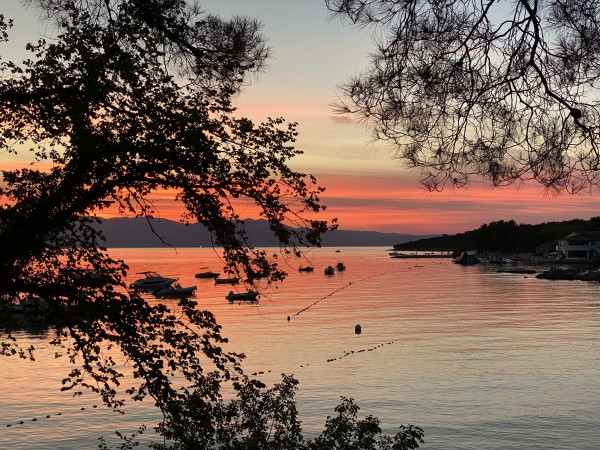 FOMO and information vs noise

Back from this vacation, I decided to keep going and stay away from Twitter and online discussion forums some more. But there was this nagging voice in the back of my head asking about all the information that I was probably missing when not taking part in these discussions. Or putting it differently: I had terrible FOMO (fear of missing out) because of all the things going on without me being involved.

But reflecting on this some more, I realized that it was not primarily the information or the facts that had me glued to my phone in the past. It was all the drama and noise around it. It was the discussion, the battling, the flame wars between people that kept me engaged and drew me into this vicious spiral of doomscrolling.

I simply didn't want to go back to this. Putting my head in the sand, maybe missing some interesting things would still be the preferable option over going back to all this drama.

So, is this sustainable? Can I keep going without online drama or doomscrolling on Twitter? Probably not a 100%. So I asked myself what could be a sustainable behavior for the next time?

I think I can live without the Twitter app on my phone - at least for now. Simply realizing how much life-time I have gained back from not doomscrolling for multiple hours per day, helped me with this decision. I will look at the Twitter website from time to time though.

Also, I remembered why I joined Twitter years ago and what I had enjoyed about it in the past. Guess what: it was not the drama, rants and bad news, for me it was what I refer to as Tech Twitter - all the latest news about IT, tech, programming, ...

So my immediate plan is to mute or unfollow all accounts that I followed out of "non-tech" motives, lately (sorry folks). As interesting as some of this political banter and discussion was, in the end it made me deeply unhappy. Hence, I'm getting rid of it.

I'm fully aware that ignoring certain events and bad news is not an ideal solution and kind of a "head-in-the-sands" behavior. But clearly, my life has changed for the better in the last month. So I guess, I did something right.