A while ago, I became curious about the programming language Rust. With it being a curly braces, semicolon style language that looks like a mixture between C++, Javascript and C# (or Java, if that's your Cup<T>) at first glance, it immediately pushed the right buttons for me.

Since the best way of learning something new is to understand it profoundly enough to be able to explain it so someone else, I decided to do exactly that and wrote a windows.developer magazine article about Rust. 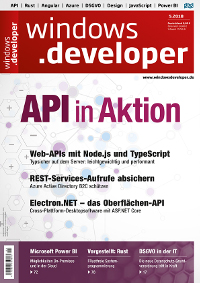 This article is the first of a 2 part series and looks at the language on a syntactic and idiomatic level. The second part will have a broader view on Rust and its ecosystem.

The articles in this magazine are written in German, so apologies to my non-German-speaking friends and followers.

If you are interested in the actual source code for this project, take a look at my GitHub repository.

Also, make sure to check out my other writing in case your are interested.