I recently blogged about switching back to Lumia and Windows Phone from the Nexus 5 that I had tried for a while.

Soon I realized that there was one single app, which I was really missing being back on Windows Phone.

It was the app of my favorite local movie place Hollywood Megaplex. Their website offers poor mobile experience, but they make it up with nice native apps for iOS and Android. Unfortunately – like so often – there is no Windows Phone app and no plans to create one any time soon.

So I decided to follow the example of Windows Phone development hero Rudy Huyn and create this missing app myself.

Luckily, I had already started recreating the functionality of their mobile app for Windows Phone a while ago, but never finished or even polished it. But now I figured, it was a good time to put some final effort into this project and finish this app. 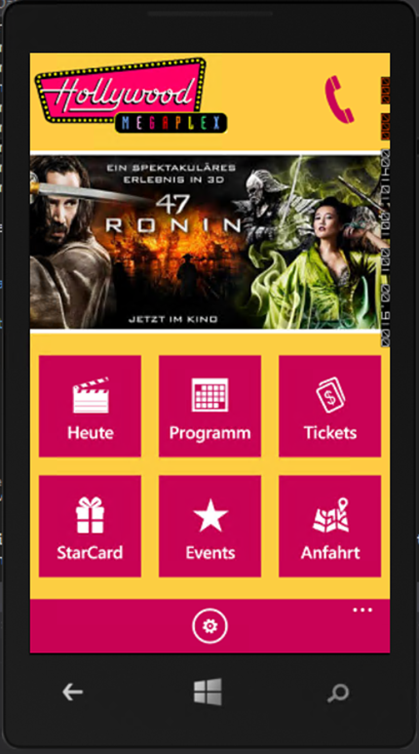 Here is what I came up with and this screencast gives an overview of the app and its functionality running inside the Windows Phone emulator (all text is in German, though).

This is also the video I sent to Hollywood Megaplex representatives asking for a possible collaboration on a Windows Phone app. Unfortunately, they showed no interest whatsoever, but I am still hoping to get green light for publishing this as a 3rd party app.

If you also want to see this app on the Windows Phone Store please help and create some buzz around it. Share this blog post, tweet about it or even mail or call Hollyood Megaplex directly asking about my app :). Thanks!